If you want to learn to surf and enjoy the beautiful ocean of Hawaii, you’ve come to the right place. As one of the top surf schools in the area, the Hans Hedemann Surf School is here to offer you a premium experience and help you make the most of your surfing journey.

North Shore is the perfect place for a surf lesson. As one of the most iconic places in the world for surfing, North Shore offers a beautiful surf spot for all skill levels. People come here year-round to perfect their surfing skills.

Good surfers come here to improve and having a soft, sandy beach also helps. While surfing may be the most popular way of riding the swells, stand-up paddling and canoeing are amazing options to have as much fun.

With everything from hourly lessons to surf camps, Hans Hedemann Surf School is your go-to for a one-of-a-kind experience on Oahu. We are equipped and capable of teaching anyone from beginner level up to more experienced surfers.

Begin by practicing the basics on the beach before hitting the water for your North Shore surf lesson! Private and semi-private lessons offer one-on-one time with your expert instructor.

Increase your confidence on the water and perfect your stand-up paddle boarding techniques with a pro! You’ll be confident enough to head out on your own in no time.

Learn to surf with a group of like-minded individuals who are excited to get out into the surf zone and catch some waves! Group sizes are small, ensuring an intimate, fun experience.

Learn the basics of stand-up paddling and enjoy a lively group setting during a North Shore Oahu SUP lesson! Get a great workout and build your SUP skills with an expert guide.

Lessons for all levels

We offer lessons in a private, semi-private, or group modality, and kids are also welcome. For kids between the ages of 4 and 10, we require a private lesson to make sure they are in an instructors care at all times.

While you can certainly try to surf on your own, we highly recommend taking a surf lesson from a professional. That way, you can learn the proper techniques and safety measures, which we consider extremely helpful and necessary.

Plus, surfing is more fun when you’re with friends! Luckily, we offer the best surf experience. Let’s hit it, and start learning how to surf! 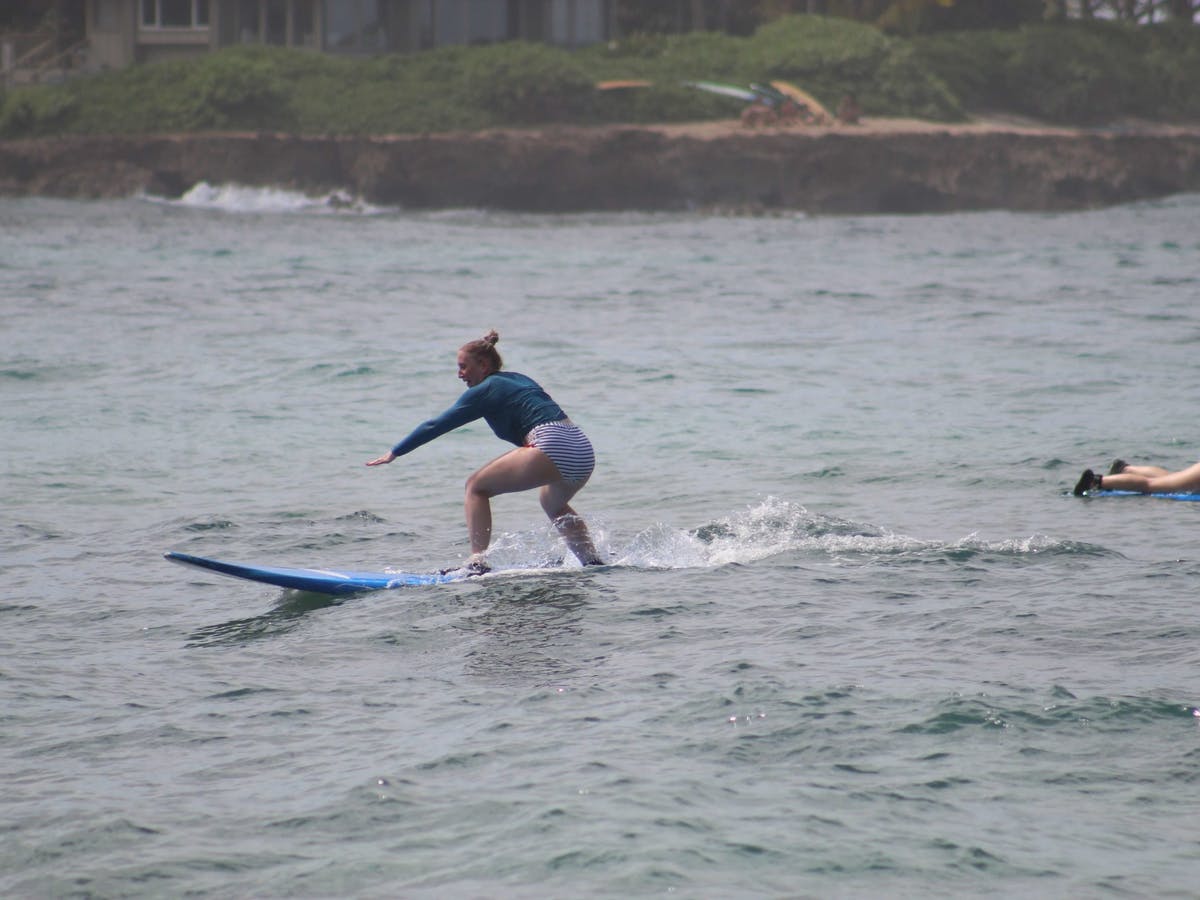 The waves here are world-famous, and there are few places you can surf with such amazing scenery and weather. While surfing can be challenging, it’s also incredibly exhilarating and rewarding.

Yes, there will be a learning curve but making the most of your surfing time is key. The more time surfing you can spend the better, we’re here to make that happen in the best way possible.

Since you can find some of the best surf conditions here it is the perfect place for beginner surfers to learn while enjoying themselves. 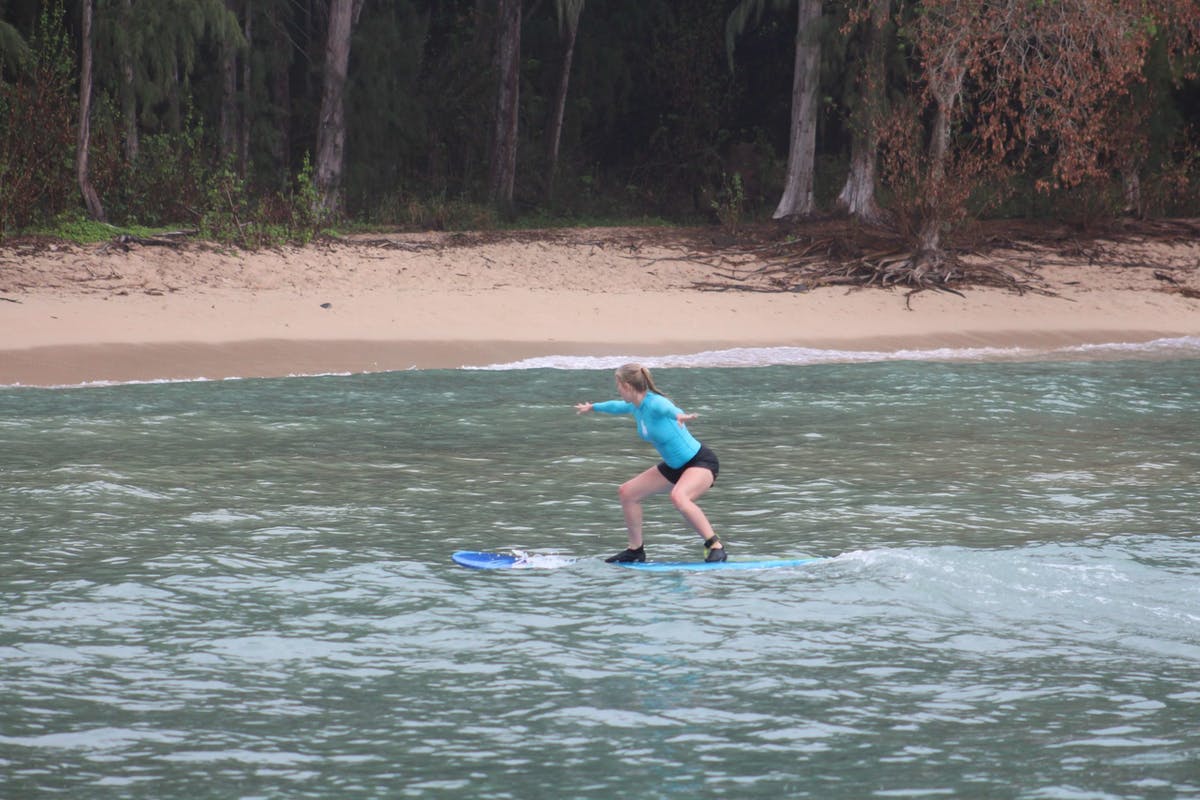 You won’t beat a first time like this one, and we’re sure you won’t want to stop.

Additionally, we are one of the best surf schools, we can guarantee that your first lesson will make you feel comfortable so you can enjoy the ocean sea as much as possible.

Deciding you want to learn is the first step, booking and learning surfing is next, we’re here to provide you with the best service for that. As one of the most recognized surf schools in Hawaii, and with over 25 years of experience, we know exactly how to take care of you while having fun and teaching you to surf.

Safety is key and we have the expertise to make sure you understand the correct technique and get into it without developing bad habits. 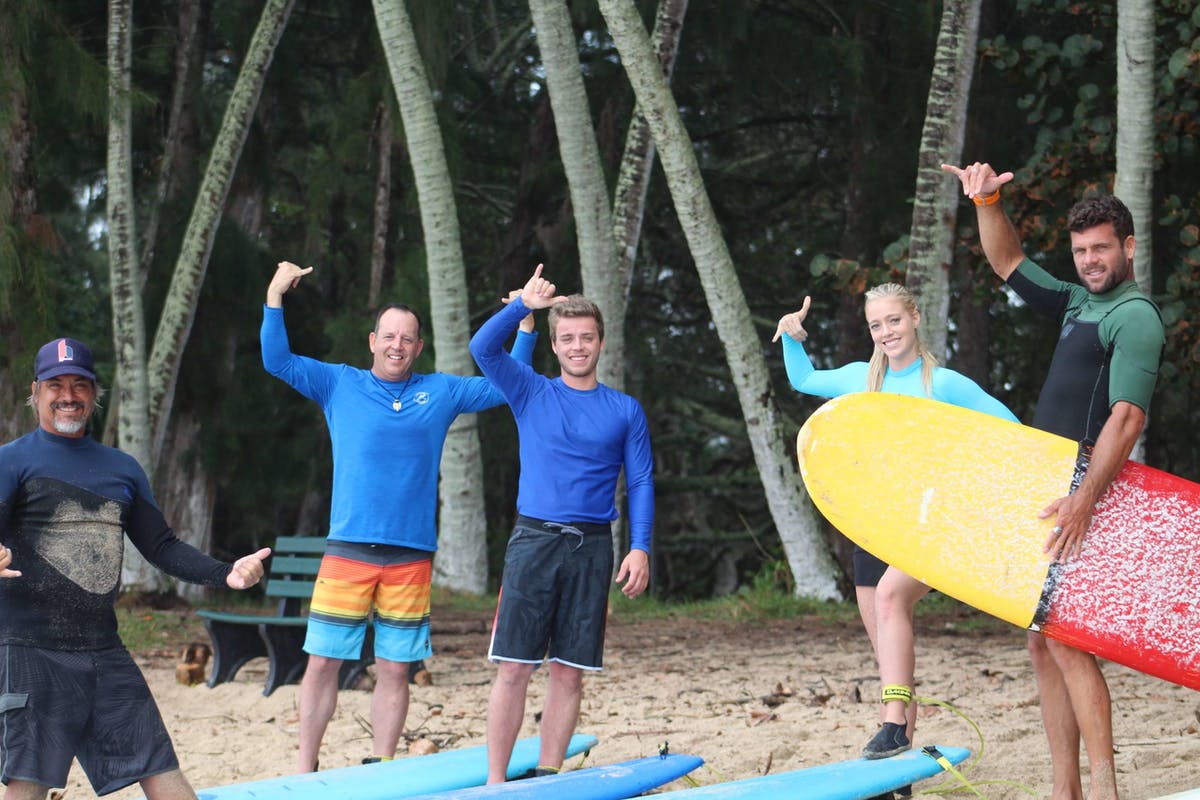 We understand it can be overwhelming, it takes an amazing surfing instructor, the right equipment, practice, and more practice. We’ll make sure you have all of this available, the more surf lessons you take, the quicker your muscle memory will develop.

We provide all the equipment you may need, but you’re free to bring your own surfboard if you have it. We can also guide you to find the right surfboard and kick any old habits that may not be working for you. If you forget anything else, you can probably find it at one of our surf shops.

Our instructors will make sure you get as many waves as possible. There is nothing more satisfying than being surrounded by Hawaii’s beautiful, turquoise waters and gliding along with the perfect weather.

Do you do surf camps?

Yes, please call us to inquire about this.

Is one surf lesson enough to surf alone?

We get asked this a lot and we want to manage your expectations in the best way so you don’t get frustrated. While one lesson may be enough for you to get on the board and catch a wave, learning to surf is a sport of practice, as most are, it is not enough for you to go on your own

What will you teach me?

The surf lessons we offer are designed so you learn, get a lot of waves, and have confidence in yourself to be able to do it while having fun.

It will take a few sessions for you to stay on top of the board for an extended period, or to make it back to the beach completely on your own.

This is all part of the process and we are aware of it, so we know what we’re doing. Your first time you may not accomplish everything you wanted to, but it will be fun, exciting, and memorable. Don’t worry, you’ll be reading and riding waves before you know it.

It will take some time before you can get yourself from the beach to the waves and back on your own. We will teach you how to do it, safely, but you must remember that learning to surf is not a quick job.

Each lesson will bring you closer to becoming a surf expert, but one lesson is not enough for that. With enough practice and dedication, you will get there and catch a big wave sooner than you think.

What if I am not a Beginner Surfer?

Once you’ve mastered the basics, you can explore or seek additional time with an instructor and work your way up to an intermediate level. Having a private lesson is the best way to get a specific catered class.

There are a lot of surf spots for advanced surfers to enjoy, and the views from the water can’t be beaten.

Whether you’re a beginner or a seasoned pro, surfing on North Shore with us is an adventure you won’t want to miss.

Make the most of the ocean

You can try surfing or stick to the SUPing. Either way, you’ll be catching waves and not stuck at the beach. The surfing lifestyle is not limited to a surfing lesson.

Book your preferred activity in Haleiwa today with one of the best surf schools available!

North shore is known as the 7 mile miracle because it is home to some of the world’s most famous surf breaks in its modest seven mile stretch. Surfers who have grown up here have become world champions such as John John Florence and Carissa Moore.

This stretch starts from Haleiwa and ends at Sunset Beach with over 30 surf spots in between. There are reef breaks and sandy bottom breaks (known as sandbars). Most of these surf spots are for experts only, though there are a few beginner surf spots such as Puena Point and Chuns.

Pipeline, sometimes referred to as Banzai Pipeline, is known for its large waves and big barrels. Every winter during the large swells, this surf spot attracts professional surfers from around the world along with 1000s of tourists who try to catch a glimpse of the action.

Every year this wave determines the world champion and it’s made and broken professional surfer’s careers.

As alluring as this wave is, it has claimed the life’s of dozens of surfers due to its shallow reef and heavy, violent nature.

A famous right hand reef break in a historic town. Known as a high performance wave this iconic surf spot hosts the infamous Triple Crown of Surfing event. Offering ripable walls and the occasional barrel this surf spot is perfect for intermediate surfers and up. On small days it’s perfect for kids!

A legendary surf spot known for its monstrous waves that get up to 50ft in height. This surf spot rarely breaks, but when it does it attracts surfers who specialize in surfing large waves. A famous surf event called “The Eddie” is hosted here when this wave is at its best. The wave was considered unsurfable until a group of surf pioneers including Greg Noll decided to give it a go. Since then this wave has become an iconic wave. Pictures and videos of it are in nearly every surf flick and chances are you’ve caught a glimpse of this wave on the internet before.

Another famous surf spot known for its heavy lips and strong currents. This right hand reef break is home to big surf events every winter because of its long rights and complex lineup. Jeff Hackman, the co -founder of the famous surf brand, Quiksilver, has won 3 surf events here and is known as Mr. Sunset. Hans Hedemann, the founder of HHsurf has won 2 events here.

A reefy right hand break located at the end of North Shore. A beautiful bay with a gorgeous resort that has hosted many big Hollywood flicks such as Forgetting Sarah Marshall. A perfect wave for beginners but also fun for professionals to play around on!